In my office, I tend to be the person in charge of birthday celebrations (no surprise).  I tend to take advantage of these special occasions and use them as opportunities to try out my craziest recipes.  Today, I made these: 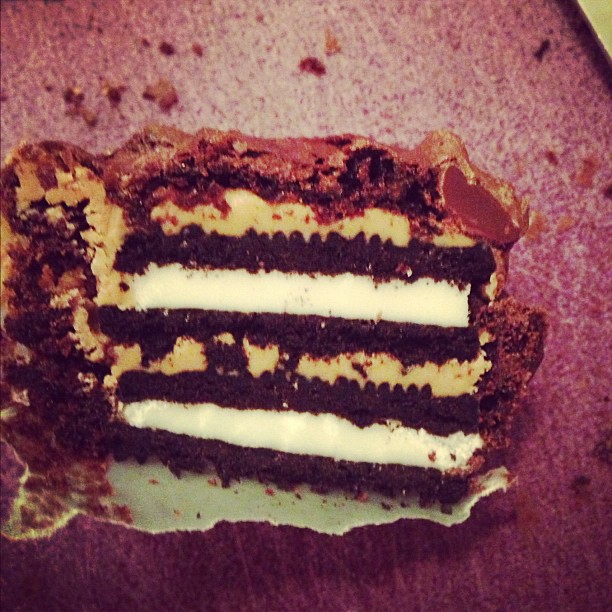 I had seen a photo of these on Pinterest but was unable to find a source website for this (if you know of one let me know and I will link back to it).  Essentially these are the easiest things in the world.  Here is what you need: 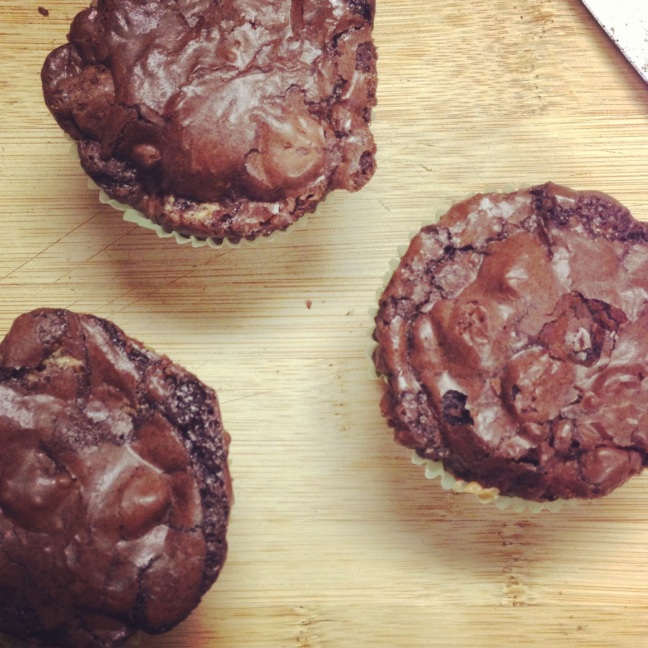 Mix your favorite brownie mix according to the directions on the box and preheat your oven accordingly.  Then place paper liners in a muffin pan.  Spray with non-stick cooking spray.  Then sandwich two Oreos together with a decent layer of peanut butter between and on top of the cookie and place in the muffin pan.  Once you have assembled 12 oreo sandwiches and placed them in the muffin tin, take an 1/4 cup measuring spoon and pour the brownie batter over them until covered.  Then bake for between 20 – 30 minutes so that a toothpick comes clean when used to inserted into the brownie. 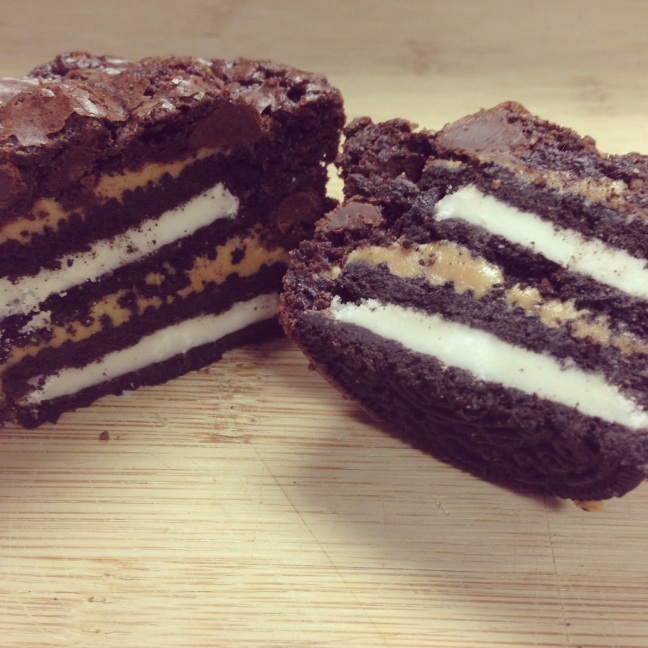 Happy Thanksgiving from both of us.  We hope that you have wonderful weeks filled with family, celebration and good food.  And don’t forget, if you need something to do with the leftover stuffing, consider our stuffing bread! 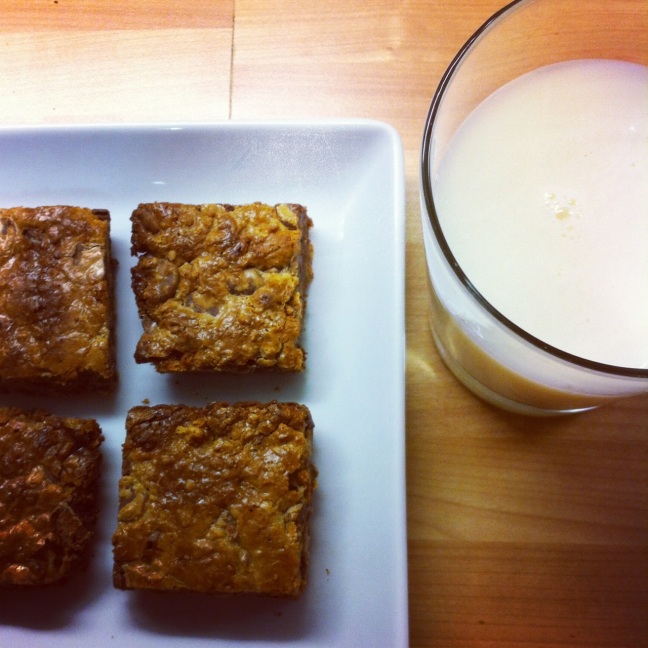 Gold Rush Brownies hold a special place in heart — these are somewhere between a cookie and a brownie with a rich caramel and chocolate flavor.  One of my best friends mother’s would make these regularly and I can still remember waiting for her to cut the crusts just so I could have a taste!  These brownies are rich and pack a flavorful punch.  Wait, I haven’t even told you the best part.  This is all from only three ingredients, 5 minutes of prep time and 35 minutes in the oven.

Here are the deets: 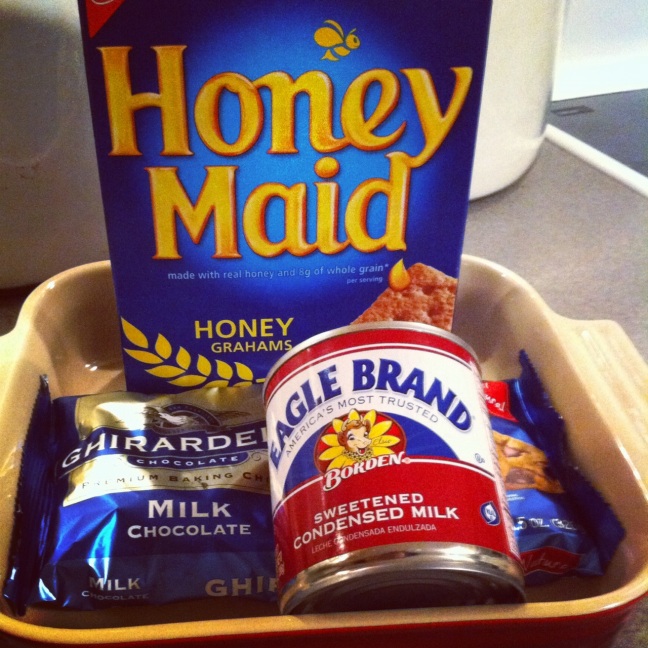 Then, remove the graham crackers from the wrapping and place in a zipper bag.  Using a rolling pin, can, your hand, etc. crush the crackers.

Place in a bowl, add the entire can of sweetened condensed milk and the desired amount of chocolate chips.  I like these to be on the more chocolate side of the spectrum so I usually put in the whole bag but you should put in at least half of a bag.

Pour into your prepared pan and bake for 35-40 minutes until golden on top. 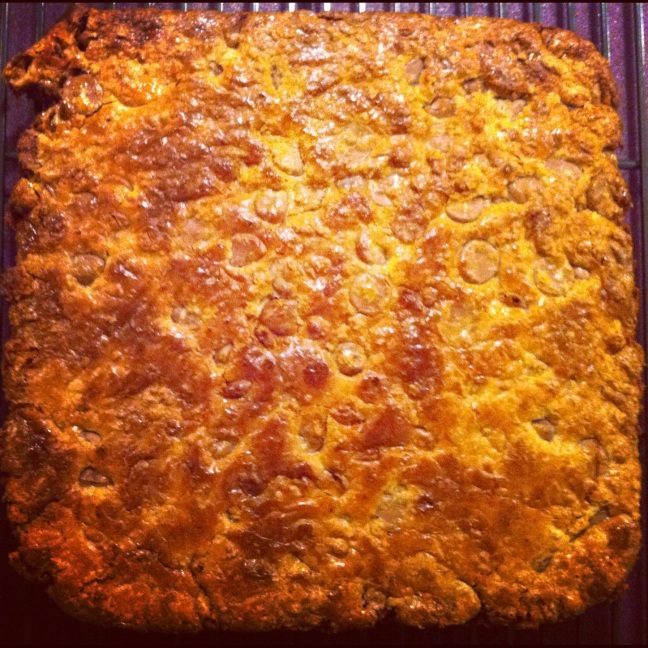 Once finished, remove immediately from pan and set on a rack to cool.  Cut crusts and serve, preferably with a cold glass of milk.

Hope you enjoy these as much as I do!

Not too long ago, I found this recipe for coconut caramel brownies on Pinterest… and immediately forgot about it.  Then a few months later, the weather turned cold, I got the itch to bake something new and rediscovered it.  After a couple of different tests, I ended up with what I lovingly refer to as my crack brownies.  I call them that because these are dangerously good and are probably my most requested recipe.  You can’t have just one because they are the perfect combination of salt and sweet.  There’s something for everyone: a pretzel crust, fudgy brownie, salted caramel, toasted coconut and a chocolate drizzle.  It’s like the seven layer dip of desserts.

Preheat oven to 350.  Line a 8×8 pan with parchment paper.  In a food processor chop the pretzels into coarse bits.  Melt the butter add to pretzels along with brown sugar.  Stir until mixed and press into the pan.  Bake for approximately 10 minutes (you really just want it to start to stick together).

While the crust is baking, start toasting your coconut by spreading a thin layer of shredded coconut into a pan (you’ll need about 1 – 2cups and I use my toaster oven for this but you could easily use your conventional oven.)  Cook at 400 degrees for approximately 2-3 minutes.  Stir and cook for another 2-3 minutes.  Watch it while cooking as the coconut will burn easily.  You want it to toast until it has a golden brown hue.   Set aside.

Now for my shameful confession: I don’t have a signature brownie recipe.  In part because I live at high altitude (and brownies are tricky up here) and also because I can’t find one better than boxed Ghirardelli Dark Chocolate.  They are simple, cheap and easy to make, plus they have chocolate chips in the mix which helps to give the brownie a fudge-like consistency.  So for this recipe, I make a batch and use half the batter for the brownie layer.  I either put the other half into a mason jar and freeze it for later, make a second batch of straight brownies or double the crack brownie recipe.  So for this layer, buy a box, make the batter, spread over the pretzel crust and bake according to instructions on the back of the box.

About 20 minutes after the brownies have started baking, I start the caramel process so that it can cool at the same time as the brownies.  There are several ways to make caramel, I have tried plenty and this is my personal favorite.  It’s adapted from a salted caramel ice cream recipe that I adore.

Over medium heat cook 1 c. sugar in large dry heavy skillet (mine is 10 inches), stir the sugar with a fork so that it cooks evenly.  Once it starts to melt, stop stirring and start swirling the skillet.  Allow the sugar to melt until it reaches a dark amber color.  At this point, add in the butter stir with your fork until it has melted.  Remove from heat.  Add in the cream.  The cream will cause the caramel to solidify a bit, keep stirring until it has melted back into caramel again.  At this point, add vanilla and set aside to cool for 20 minutes or so (until you can touch it without burning yourself).   Then add a heaping tsp of Maldon sea salt.  Stir until combined and pour over the brownie layer.

+ Take your time and stay alert.  Caramel will burn easily if you rush which will ruin the flavor and it won’t come together properly when you add the cream.  Once it starts to melt, the next steps happen very quickly.  Make sure that you have everything with you beside the stove so you can add them when you need to.  This stage will take you 20 minutes or so.  Be prepared to stir for that long.

+ Caramel is extremely hot.  I know this seems like a no-brainer but don’t try to taste it.   I have burned my tongue too many times because I always want to taste it to see if its ready.  You can’t.  You have to do this based on color alone.

+ Maldon is the best salt for this recipe.  I’ve tried Kosher and other Sea Salts but you really need a flaky salt in order to get those bursts of salt that make this caramel so great. 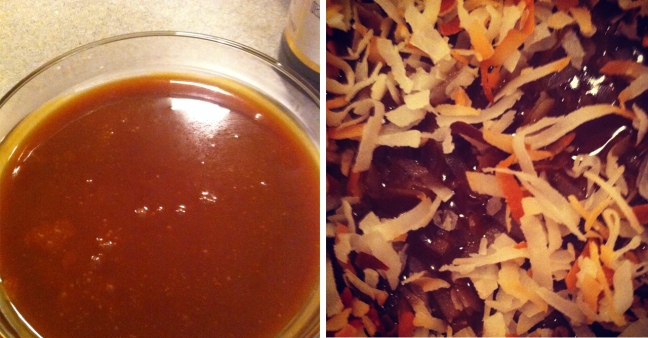 While the caramel is still setting, sprinkle the coconut over it.  The caramel will “glue” the coconut to the rest of the layers.  Allow to cool completely.  I often start this at night and cover it with saran wrap at this stage and refrigerate it overnight.  Then in the morning, I place about 1c. of chocolate chips in a microwave proof bowl and melt the chocolate in 30 second intervals stirring until smooth.  Then using a spoon, drizzle the chocolate over the pan.   Allow the chocolate to set and then remove the entire brownie from the pan and peel away from the parchment.  Cut and serve.

Let me know if you make these!  And does anyone have a favorite brownie recipe they want to share with me?